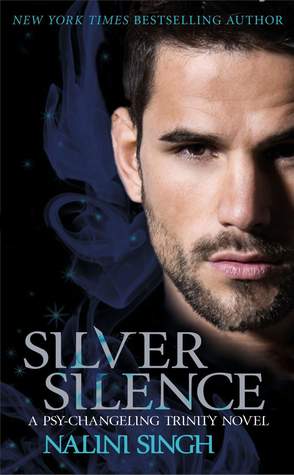 I love both covers - so I posted both :) Its no secret that Nalini is my Favourite Author, and I am happy to say I wasn't disappointed with the new Arc in the Psy-Changling world, The Trinity storyline has gotten off to a great start with Silver Silence, check out my review below.

New York Times bestselling author Nalini Singh returns to herextraordinary Psy-Changeling world with a story of wild passion and darkest betrayal... Control. Precision. Family. These are the principles that drive Silver Mercant. At a time when the fledgling Trinity Accord seeks to unite a divided world, with Silver playing a crucial role as director of a worldwide emergency response network, wildness and chaos are the last things she needs in her life. But that's exactly what Valentin Nikolaev, alpha of the StoneWater bears, brings with him. Valentin has never met a more fascinating woman. Though Silver is ruled by Silence--her mind clear of all emotion--Valentin senses a whisper of fire around her. That's what keeps him climbing apartment buildings to be near her. But when a shadow assassin almost succeeds in poisoning Silver, the stakes become deadly serious...and Silver finds herself in the heart of a powerful bear clan. Her would-be assassin has no idea what their poison has unleashed...

Silver Silence by Nalini Singh Kat's rating: 5 of 5 stars Valentin... I didn't think someone could knock the Cats off my top Changling group but the bears are gaining ground! Nalini will have your heart on stop go mode as you read, I had a brief breakdown in the middle of the office break room (trying not to outwardly cry while my heart was breaking at the situation Silver and Valentin end up in) and then had to wait 3 more excruciating hours till I could get home and continue to read, and I did last night, finishing up at about 1 am. No spoilers here guys and gals - just a recommendation that this book goes to prove that Nalini Singh deserves my top Author spot on my bookshelf. I will be re-reading before the next book is published. The first 15 books have been my go-to re-read series, followed closely by a binge of Guild hunters. If I had to pick a series to be a castaway on a desert island for 10 years It would be the whole Nalini Paranormal Back Catalogue. Nalini's writing and world building are deep, her characters multi-faceted and they delve deep into your heart, This world astounds me as I read and read again and pick up new nuances of information each time. I know she has a system to keep track of who what where and why, as we got to hear about it when I had the pleasure of meeting Nalini in Auckland at the release of Allegiance of Honour, (going gaga in her presence) I know that once a reader finds Nalini, they become lifelong fans. I was so pleased that there is this new series as I would be heartbroken if this world stopped evolving... Long may Psy-Changling world continue to the next century!! And I can't wait for the next book in this new Trinity ARC. PS Nalini thanks for not breaking my heart! View all Kat's reviews

“This time, his bear stayed quiet, finally getting with the “sneaky like a cat” program. Today” ― Nalini Singh, Silver Silence
“Raw pain scored his insides, but the bear was in agreement with the man: as long as Silver lived, he could take the pain, take the loss that would haunt him always. He had this big body for a reason. It could take a lot of punishment. As long as she breathed, he’d survive. He’d watch over her from afar, and he’d survive because his mate was alive.” ― Nalini Singh, Silver Silence

I was born in Fiji and raised in New Zealand. I spent three years living and working in Japan, where I took the chance to travel around Asia. I’m back in New Zealand now, but I’m always plotting new trips. If you’d like to see some of my travel snapshots, have a look at the Travel Diary page. I’ve worked as a lawyer, a librarian, a candy factory general hand, a bank temp and an English teacher, but not necessarily in that order. Some might call that inconsistency, but I call it grist for the writer’s mill. Facebook ~ Twitter ~ Website ~ Instagram
Posted by Katsindiebookblog at 05:04