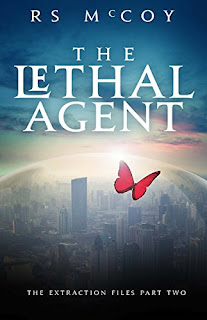 Blurb for The Lethal Agent

Mable Wilkinson is close to getting everything she ever wanted. She has a home in a facility in New York, a job extracting parasitic insects, and she's even made some friends. If she can keep up this pace for a few years, she’ll earn a lifetime of security for herself—and for Hadley.
But that doesn’t mean her job is easy. Each time she begins to discover something about the bugs, they strike again, wreaking havoc on the world. Researchers are dying with increasing frequency, and Mable is powerless to stop it.
As the mounting bug attacks threaten to destroy humanity, Mable realizes she’s out of time. Her team has only days to find a solution before the human race loses its homeworld—if the bugs don’t infect them first.

The Lethal Agent by R.S. McCoy
My rating: 5 of 5 stars

***Gifted in exchange for an honest review***

This is the second book in the sci-fi series that is based in what could be the future of our Earth.

It is a bleak and scary future... scary because I seriously can see this being a very real scenario.

I pray that we as a human species can Stop this path of destruction and hatred that seems prevalent on our news lately.

OK before I start getting off on a tangent, lets get back to this book.

Well for a start you need to read book 1 The Killing Jar. which kept me guessing what was going on for a long time, and this book continues to make you take a ride of twists and turns as you turn the page. And I will warn you crush you at some parts!

As I said this series is based in the future, when our world is dying and the remaining human race is living underground, under domes and we are desperately trying to find a new world to go pollute!

(OK maybe by the time they find a planet the humans that are left will has stopped being selfish and only looking at the present needs and wants that we will live in sync with the world instead of stripping its resources -
But since there are drug addicts and mining colonies mentioned in this book I am assuming that we are still arrogant and think that we are entitled to own anything we come across!)

And to not give this story away I can't really say much more about the actual plotline.

But our intrepid bunch of young untouchables ( a term given to those that have not cut the muster for some reason or another,the outcasts that have no real future in the strict sects that are the basis of the world as a whole, these are the Scholars, Artisans, and Craftsmen. if you do not fit in these 3 sects then you are destined to either be sent to the penal colonies or live 'underground' or die)

Our group of misfits who were paired up to work in the secret Agency CPI that are tasked with hunting and finding out why the top of the sects in the world/outlying colonies are being infected by parasitic bugs.

Let Ms McCoy take you on a voyage into a possible future of our world, and how the seemingly young raw recruits of Silas Arrenstein are the only chance at stopping the infestation and possible death of the human race. Ms McCoy has written a brilliant Suspense Sci-fi, the series reminds me of a few of my favourite reads as well as some of my favourite Films...

This series is a must for any sci-fi/fantasy reader and should be on your TBR now.

I want this series in Paperback so I can have it sat on my Favourites shelf.

Grab Book 1 now so you can be ready for the release of The Lethal Agent.

View all my reviews
Posted by Katsindiebookblog at 08:00 No comments:

Posted by Katsindiebookblog at 20:00 No comments: