Trapped in an abusive relationship for two years, leaving could prove deadly for Becca Kian. But when she’s pushed a step too far, Becca has no choice but to flee. After an accident that leaves her unconscious, Becca wakes to find herself in the cabin of a man who’s as entrancing as he is dangerous. Because this man makes her want to dream — dream of a world where Alex Scar doesn’t exist.
Both Minotaur and human, Aster Tavros is a shifter in hiding. Living in Woodland Creek, he’s made no effort to form relationships, too afraid to allow others to see his true nature. Because when they do, they run. Yet when Becca comes crashing into his life, he ignores every one of his rules. Passion ignites between them, but when secrets and pasts collide, Aster has a choice. He can hide his identity, or reveal his true self to save Becca, all the while, risking losing her forever…

True love is powerful, but some people will go to any lengths to destroy it.

Book 2 - Wolf Dancer
#Nico&OliviasStory
RELEASE DATE January 2016
Due to Winter Wolf being picked up by Skyskape Publishing Rachel has had to postpone the release of Wolf Dancer until January 2016.

War is inevitable, the question is who will survive?

Rachel M. Raithby started her writing career in 2013 and hasn't looked back. She draws her inspiration from the many places she has lived and traveled, as well as from her love of the paranormal and thriller movies. She can often be found hiding out with a good book or writing more fast-paced and thrilling stories where love always conquers all. A Brit who left the UK in 2008, she resides in a quiet town in Queensland, Australia, with her family.
Her books include, the adult Paranormal Romance novels 'The Deadwood Hunter Series' and the Young Adult novel 'Winter Wolf.'

Keep up to date with Rachel  Join Rachels Street Team

Can a demon’s heart of ice be thawed? Ash may have escaped death several times, but now things are finally looking up. The doppelganger is gone, she’s dating Leo, and the Venantium are staying away from her - for now. But a new threat rises from the Darkworld, and only the fortune-teller knows the true extent of the danger they’re in. Lucifer, a sorcerer who did the impossible and cheated death through escaping to the Darkworld, is on the move. Now his second-in-command, Mephistopheles the demon, is loose in our world - and will do anything to win Ash over to his side. The Venantium fear a repeat of the Demon Wars, the demonic invasion that wiped out the Blackstone family. But there’s more to those events than the records reveal. When Ash finds the lost diary of Melivia Blackstone, she starts to dig into the past to find the town’s forgotten history - leading to a revelation that shocks her to the core. Leo seems to be the only person Ash can rely on, yet can she truly open up to him, knowing what she is? Blackstone’s dark history is rising to the surface, and it seems even memory can lie. The worst betrayal waits around the corner, and Ash has to decide whether to trust Leo with her darkest secret, even when it has the potential to destroy them both…

Demon Heart by Emma L. Adams Jenni's rating: 4 of 5 stars I am giving this review on behalf of Kats Book Promotions/ Katsindiebookblog. Such a great addition to this series, and yet how the ending is, could there be a possibility of another one in the future? I do hope so! Granted there is not as much action as the previous books, this book still keeps you on your toes, and the fights are still awesome! Ash and her friends are now forced to deal with yet another evil, known as Lucifer, who has seemed to escape the Darkworld along with his 2nd in command Mephistopheles. Could it be possible that there will be another Demon War? Or will Ash and her friends be able to save it, yet again? With so much going on, Ash is still hiding secrets. Will she finally let them be known or will she continue to hide them? Ash and Leo are finally together but yet she is still holding back in the relationship. Can she truly open up and fully enjoy their relationship? Or will it have the potential to completely destroy them? This is a quick, yet a good read with quite a few twists in the story. A great and unique writing style as well. I would definitely recommend this book! View all Jenni's reviews 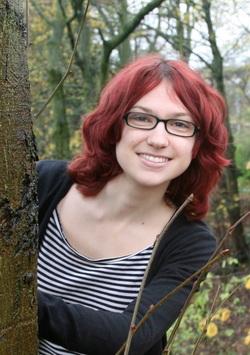 Emma spent her childhood creating imaginary worlds to compensate for a disappointingly average reality, so it was probably inevitable that she ended up writing speculative fiction. She was born in Birmingham, UK, which she fled at the first opportunity to study English Literature at Lancaster University. In her three years at Lancaster, she hiked up mountains, skydived in Australia, and endured a traumatic episode involving a swarm of bees in the Costa Rican jungle. She also entertained her creative writing group and baffled her tutors by submitting strange fantasy tales featuring dragons and supernatural monsters to workshops. These included her first publication, a rather bleak dystopian piece, and a disturbing story about a homicidal duck (which she hopes will never see the light of day).

Now a reluctant graduate, Emma refuses to settle down and be normal. When not embarking on wild excursions and writing fantasy novels, she edits and proofreads novels for various publishing houses and reads an improbable number of books. Emma is currently working on the Alliance series, a multiple-universe adult fantasy featuring magic, monsters, cool gadgets and inappropriate humour. Her upper-YA urban fantasy Darkworld series is published by Curiosity Quills Press.

Curiosity Quills Press (CQ) is a small hybrid publishing company specializing in genre fiction of the highest quality. With 150+ titles in our catalog already and approximately 6 new books coming out each month, there’s never a dull moment at CQ. We work with major retailers such as Amazon, Barnes & Noble, and Audible to ensure that you, the reader, can find whatever you are looking for at your convenience.
Founded in 2011 by Eugene Teplitsky and Lisa Gus, CQ was initially a resource portal for writing and publishing, created in an effort to help writers, like themselves, survive the publishing industry. After rapid success, CQ morphed into publishing press that over time has solidified its share in the market. Now we spend our days searching for the next great escape!
Website | Facebook | Twitter | Goodreads

Posted by Katsindiebookblog at 01:00 No comments: